It occurred to me that I never posted the results of Aidan's last football game.  I know you've all been waiting with bated breath to find out if they won or not.  Well, they did indeed win that game, and they won again tonight as well.  As you can see from the scores, their defense is quite formidable. 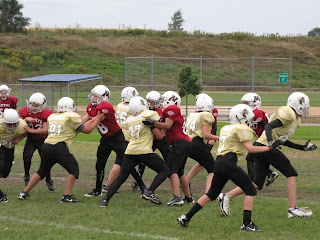 There are many things I like about Aidan's current team/coach, aside from the fact that they win every game.  Coach makes sure the team is disciplined, they are not allowed to slack off or miss practices without penalties.  They must show excellent sportsmanship at all times, as well.  Coach is never harsh, cruel or unkind, but he expects the boys to give it their all - and they do, game after game after game.


Anytime a player is injured (on our team or the opposing team), the team "takes a knee" until the injured player is up.  And these boys are quick to applaud the rising of the injured  player, no matter whose team he is on. 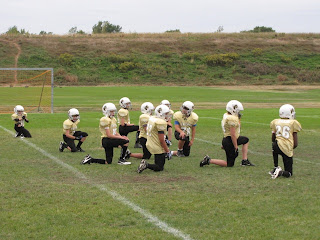 Because our line is quite good, we unfortunately had quite a few moments with our players "on a knee" tonight.  Aidan was the cause of two of those times.  Just to get you all excited to come see the game, I'll put in the video of Aidan's last tackle of the night.  He's 87 in the upper right at the beginning of the video.  Enjoy - and don't worry, I don't think the other kid was seriously injured, but he did have the wind knocked out of him :-(

There's still time to make a game....here's the updated game schedule for those of you that are interested: Sept. 20, 24, 29, Oct. 1 (am game), 4.  After that come play-off games and then the Lightning Bowl (if we make it, which seems quite likely at this point) which is somewhere towards the end of Oct.
Posted by Crazy mom at 10:10 PM