I should have known this would happen...you give a boy a bb gun and what's he going to want to do with it?  Yes, that's right, shoot things!  Not being a hunter myself, I'm a little squeamish about dead animals, so you can imagine my surprise when I heard the following from the breakfast table this morning (I was in another room).

Aidan (rushing into the house) - "MOM!!  YOU HAVE TO COME SEE THE SQUIRREL I SHOT!!  Come take a picture!"

I dutifully congratulated him on his kill and managed to take a picture (without really looking at the victim), but I was not, under any circumstances, going to skin and cook that thing, despite much encouragement from my Facebook friends!

Now, Aidan insisted that I blog about his amazing squirrel hunting adventures and include a picture of the trophy, so, once again being the dutiful mother, here is the picture of Aidan's first squirrel. 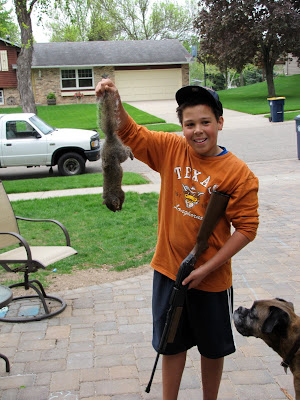 Snickers, a squirrel killer herself, appears to be quite interested in Aidan's accomplishment!
Posted by Crazy mom at 10:00 PM