And So It Began

Bagpipe competition season, that is.  Saturday was Evan's first competition of the season - the Minnesota Scottish Festival & Highland Games.  I wish I could say it was a glorious day, but in all honesty, it was quite miserable - cold, windy and rainy.  I was dressed in numerous layers, including long-underwear and wool socks and I was still cold.   I can't even imagine how cold the pipers and drummers were in their kilts, etc.  When they competed they were in shirt-sleeves (it's easier to play the pipes if you don't have a suit coat on).

Anyway, Evan had a wonderful time in his solo competitions and he came away with first places in the piobaireachd and the jig and a second place in the strathspey reel.  He scratched his 2/4 March because his pipes weren't working properly (a problem in the cold and rain).  All in all, he had an excellent start to his solo season.  He is competing in Grade 3 this year, a grade level higher than last year.

The band, on the other hand, had a bit of a harder time.  The Grade 3 band had pipe problems (due to the inclement weather) and some health problems with  some of the members, so they did not perform well.  They were scheduled for two competitions, but they scratched the second one because they did not have enough pipers who were able to perform :-(.  This was particularly discouraging because they have been practicing a ton and, under normal circumstances, they are quite good.  The Grade 4 band, however, did well and took home a second place medal.

Grade 3 band marching to the line to begin their competition. 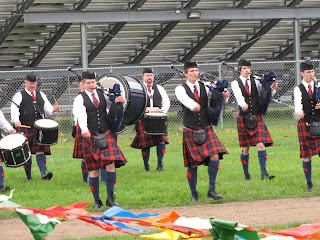 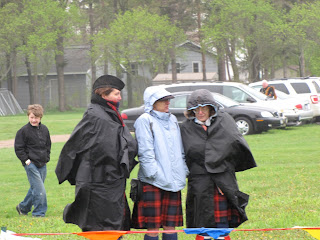