Once again, our family is all under one roof.  I love going away, but not so much so when we are not all together.  Unfortunately, as Evan gets older we, more often than not, are without him for our ventures :-(  I know, it's part of his growing up and it's good, but this mama bear likes all of her cubs with her.

Anyway, I'm tired, so I'm not going to make a long post, but I wanted to apprise you of how Evan did this weekend at his competition.

The competition was definitely tougher this weekend than last, as this was the US Open Bagpiping competition.  When I spoke to Evan yesterday morning after he had played his solos, but before the results were known, he informed me that he "didn't do too well."  Bagpiping is like that, some days you play well and other days, not so much so.  He felt like he was having an off day :-(  Well, Chris called me as the results came in and I was very surprised to hear that Evan took 2nd in his 2/4 March,  5th in his Piobaireachd, and 1st in his 6/8 March.  Yay, Evan!

I was even more surprised at the end of the day when he was awarded the Ronald J. Chapman Memorial Award for Best Amateur Piper of the Day, Grade IV!  He even got a fancy little silver plate :-) 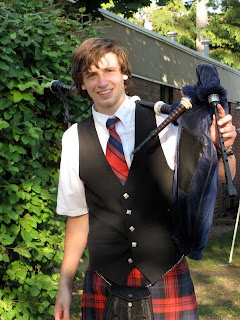 This is Evan's instructor, Stephen, tuning Evan's pipes before he competes.  As a side not, Stephen is an EXCELLENT teacher and we are so happy that Evan has started taking lessons with him! 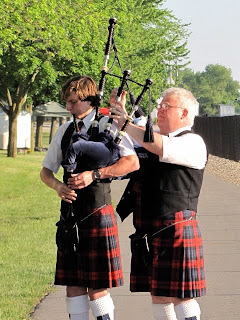 When he's not competing or tuning, Evan spends the rest of his time at these events doing this... 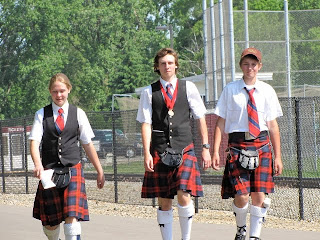 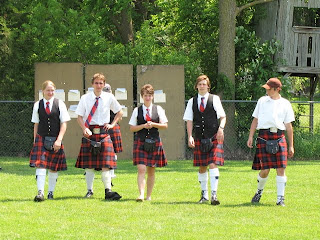 The band played well and took third place (or tied for second - I'm a little confused about the details on that one).  They were hoping for a better placement, but I'm proud of them all the same.

With Memorial Day and all I already feel behind for my week and then we leave on Friday for the competition in Milwaukee.  After that, I promise, no more bagpiping pictures until August.  Then be prepared!
Posted by Crazy mom at 10:57 PM