Our Saturday was pretty much consumed by the MN Highland Games.  Evan left the house at 7:30 am and didn't get home until about 8:00 pm.   The day was filled with lots of piping and lots of fun.

Evan competed in two solo events and did a great job.  He took first place in Grade 4 piobaireachd out of ten competitors and he took a third place in his 2/4 march (out of 15 competitors).  He has worked so very hard on this piping in the past few months and we are REALLY proud of his accomplishments.  We are also VERY thankful to all of the band members who have helped him out, given him advice (whether asked for or not), provided constructive criticism (sometimes loudly), and generally encouraged him to become a better piper.  You guys and gals are outstanding!

Speaking of the band, they did OUTSTANDING as usual.  The Grade 3 band (which Evan plays with) took home four first place awards and two second place awards.  They rocked!

Now for some pictures...Here's my favorite piper. 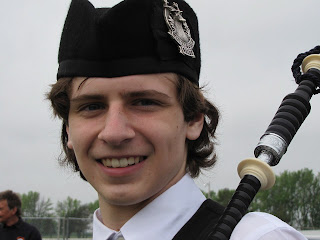 The Three Musketeers.  Evan with his friends Alyssa and Joel. 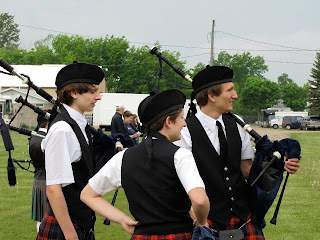 The band marches onto the competition field.  Evan is the third person in the second row. 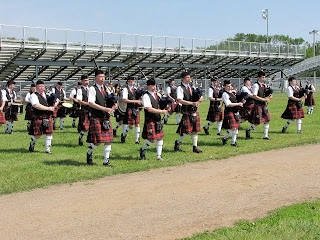 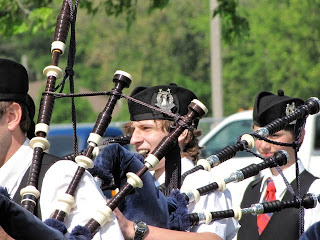 Truth be told, the whole day wasn't filled with piping.  Nina did get a henna tattoo and we came home with three additional knives.  Why is it that we always come home with more knives or swords whenever we go to these Highland events???? 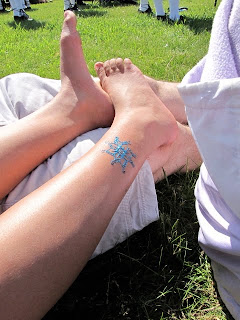 Anyway, it was a great competition and they get to do it all again next weekend in Alma, MI, except next weekend Evan will be doing three solo events and he's hoping to come home with three first place ribbons :-)
Posted by Crazy mom at 10:33 PM