A Toilet and a Tub

Two-thirds of a bathroom is better than no bathroom at all! The bathroom was supposed to be 99% done today, but because of a damaged vanity (which we discovered when we took it out of the box) we are only 66.7% done. Rejoicing nonetheless that we do not need to stumble down the stairs half-asleep to use the bathroom in the middle of the night! Also, taking a shower in a full-sized bathtub instead of a two foot by two foot shower stall will seem like a luxury. (do you have any idea how hard it is to shave your legs in a tiny shower stall???) 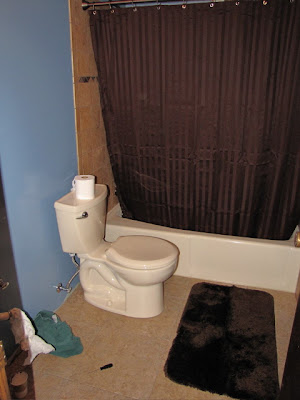 Unfortunately, the vanity came from Lowe's which is not particularly close to us, so finding time to go over there and return it could be tricky. But hey, the kitchen sink works just fine from brushing teeth, etc.
Posted by Crazy mom at 9:54 PM