Here's another thing that happens every year - Evan's birthday! 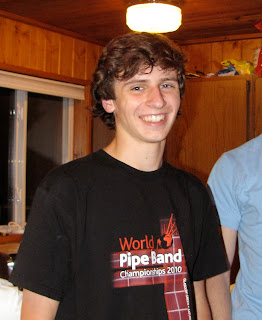 Seventeen years ago today Evan entered the world, and our lives have never been the same.  Actually, those first few days after bringing Evan home our primary thought was, "What have we done!"  Let's just say adjusting to parenthood took a little time.  After that initial week or so though, Evan has been a tremendous joy to have as a son.

I have to say though, that I have cried many tears over this boy in the last year.  No, he hasn't been a problem child, it's just that he is growing up and soon, very soon, he will be off to college.  It's an adjustment to me to have to "let go" of my firstborn.  I immensely proud of him, but it's hard on my heart to let him go.

Evan, we love you so much and we are so proud of the fine, godly young man you have become.  Have an outstanding birthday!
Posted by Crazy mom at 7:03 AM