We do nicknames over here quite a bit.  Actually, We use them so much I'm amazed that my children ever learn their real names.  Now some nicknames were given for no reason at all - Tater Tot, for instance, was Aidan's nickname when he was little.  Why?  Who knows.  One day we called him that and it just stuck.  It evolved into Tate which is what his nickname is right now.
Other nicknames came about because they sound funny or nice or something like that.  Molly is frequently known as Molly Dolly and Emily is called Emilemily.  Fun to say, not too much meaning behind them.
Then, we get to the nicknames that have significance.  Raelea for instance.  When she was a baby we would wake up to sounds of Raelea jabbering in her crib.  She wasn't unhappy, but she was definitely awake before the rest of us.  She became known as Raelea Rooster or Raelea Roo for short.
Well, then we have Zoe. Her nickname is ZoBug.  You see, when I braid her hair and she sleeps on it this is what happens... 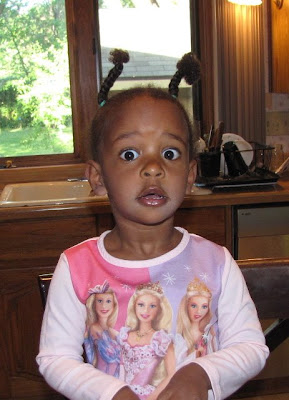 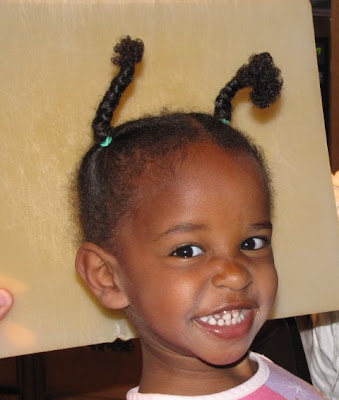 The child sprouts a pair of antennae that would make any bug jealous.  Truth be told, I have even let her go out of the house looking like this.  You gotta admit, she's the cutest little bug you've ever seen!
Posted by Crazy mom at 10:00 PM