Congratulations to the Minnesota Police Pipe Band (MPPB) Grade 3 for winning first place at the Chicago Scots Highland Games this past weekend!!!!

This was a significant win for the band for several reasons.  First, MPPB was competing against Macalaster College Pipe Band and Chicago Celtic and both bands had defeated MPPB earlier this season.  The other two bands are very good and they played well on Saturday.  While MPPB Gr. 3 has only seven pipers, both Macalaster and Chicago Celtic have at least 12 each.  Having a smaller number of pipers has some advantages, but it does mean that each and every piper will be heard by the judges, so if one person makes a mistake it WILL be noticed.

Also, according to "band historian" Pari, this was only the second time MPPB Gr. 3 has won at Chicago since 1987.

Despite what we told the Macalaster folks, the win was NOT a result of playing Pop Goes the Weasel on the chanters during the seven hour drive to Chicago.  The main reason I am so happy about the win is that I know how hard these pipers have worked to get to this point.  The pipers have been having group practice three times a week- every week - for months.  That, in addition to their individual practicing and lessons, means hours and hours and hours and hours of practice.  Many of the pipers also competed solo at Chicago, so they had to be preparing for those competitions as well (coming away with two 1st place, two 2nd, and three 3rd).  They have worked so VERY HARD for this win!!

Also note,  that aside from Stephen, whose age I don't know, the average age for the pipe corp is 18!  Mark, Stephen, Joel, Evan, Abby, Alex and Ian, you guys are ROCK STARS!!  Thanks also to the supporting drum corp of Galen, Laurie, Erin, Rob, Sally and Mark.

Special thanks to Mark Lucas for being a great Pipe Major and to Stephen Elias for being an amazing teacher to many of the young pipers!!!

Without further ado, here is what the band was doing at 4:00 on Saturday.... 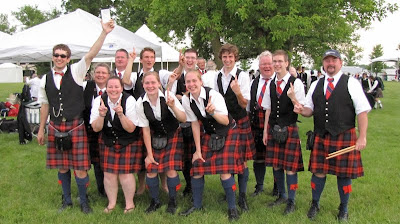