So, now that it is Thursday and I can tell you all my secret, some of you are going to be sorely disappointed :-( You see, it really isn't too terribly interesting to those outside of our family, but it was a big deal to us...here's a clue.... 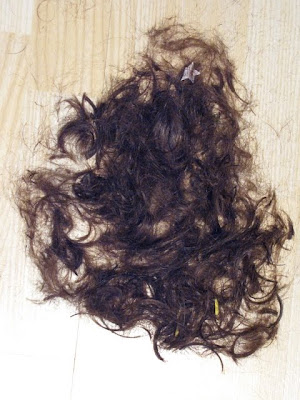 Yes, hair! Here's the secret -
BEFORE 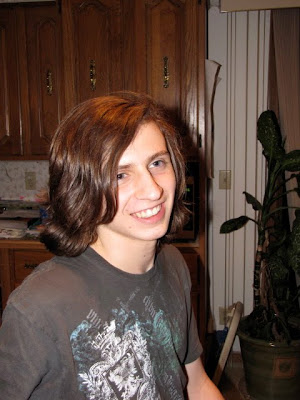 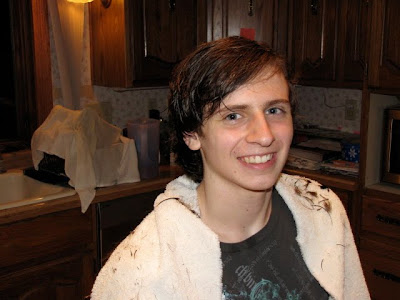 Yes, indeed, Evan got his haircut! Some of you already know this because you saw him on Sunday, but it needed to remain a secret until he could surprise the folks in his band tonight.
So, what's the big deal? Well, Chris has been trying to talk Evan into getting his hair cut for quite some time now (say a year or so) and Evan's pipe major (and the rest of the band) have been trying to talk Evan into getting his hair cut for a long time, too. The answer from Evan was always, "NO!"
Well, lo and behold, Evan went for a job interview last Friday and the manager said, "You're hired, as long as you have your haircut by tomorrow at 3:00."
And that was that. He went home and we cut his hair. If I had known it would be so easy to talk him into a haircut I would have encouraged him to get a job a long time ago. Anyway, don't you think he looks smashing?
Posted by Crazy mom at 10:23 PM