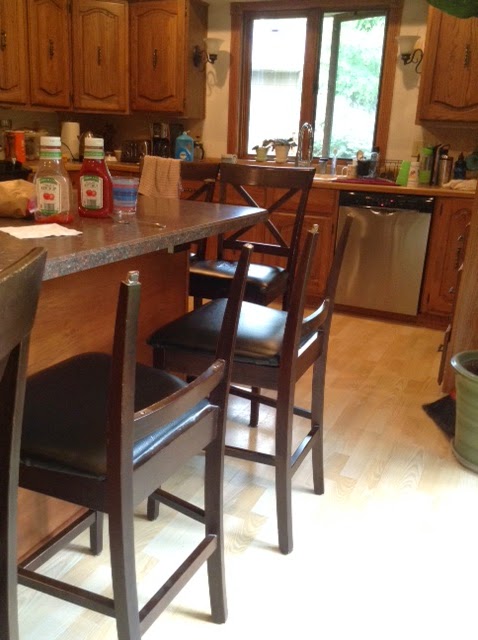 If you've been to our house in the last six years and spent any time in our kitchen, you've seen the sad state of our kitchen chairs.  It is usually one of the first things that people notice when they walk in the kitchen.  Frequently, someone will ask, "What happened to the chairs?" A question that I have become quite skilled at NOT answering.  I'm quite good at pretending I didn't hear something, if I have to be!

Now that we are remodeling the kitchen, we will soon have new (unbroken chairs), and I have decided it is a good time to tell, "What happened to the chairs?"

In the adoption world, there is a fine line between sharing too much and not sharing enough.  Share too much, and you violate your child's privacy. Don't share enough and you leave others in the adoption community feeling like they are the only ones who are dealing with these things. It's a balancing act I try to perform to the best of my ability.  Those of you with children struggling with attachment are going to really understand this post. For those of you not exposed to attachment issues, I want to give you a small glimpse of what life is like for some of us.

Every one of those damaged chairs represents the results of the damage done to a child's heart.  My child's heart.  Some children who are adopted transition smoothly into their new life without a wrinkle, but MOST children struggle at some point, in some way.  The older a child was when he was adopted, the greater the struggle usually is.  Sadly, the default self-defense mechanism for some of these kids is violence.  The trigger that sets them off might be as minor as not liking what's for breakfast.  In our case, the violence frequently started with kitchen chairs hitting the floor.

So, "What happened to the chairs?" They were violently broken by and angry, hurt child.

BUT, there is hope and healing.  It has been at least six months since a chair has hit the floor.  It has been so long that we are going to get new chairs.  I had a long talk with my chair-breaking child.  I praised him for the incredible growth in self-control he has shown in not throwing chairs.  I told him that I am confident that that is all behind him now, so confident that I want him to pick out our new chairs.  He is VERY anxious to get those new chairs because they won't just be new chairs, they will be a new chapter in his life.
Posted by Crazy mom at 3:23 PM