So, inquiring minds (Tami) want to know how the show was last night.  Well, as always, Les Miserable was a great show!  It was my fourth or fifth time seeing it (I lost track, as it hasn't been touring for many years).  They made a few changes since it last traveled, and the set has changed as well.  Obviously, there were new actors, also.

The songs/story is all the same - thank goodness!  It would be really hard to improve upon it!  Gone is the revolving set.  It was playing at the Orpheum Theater in Minneapolis which has a much smaller stage than the Ordway (in St. Paul) where it used to play.  This caused it to seem somewhat cramped on stage at times.  Now, for my personal opinions: I did not care for the actress who played Fantine or the actor they chose for Javert (although he had a fine voice).  On the flip side, Jean Valjean was great and sang all of the songs to perfection, little Cossette was amazing (and for our show, played by the actual daughter of the actor who played Valjean), but the one to steal the show was Eponine.  She was phenomenal!  What a voice!  Not to mention she could sing great while in the throes of death, lying prostrate on the stage.  How do they do that, anyway???  I can't sing decent while standing up, and hereshe is flailing about and hitting every note perfectly...it was really impressive!


Anyway, if you've never gone to see Les Miserables, I can't urge you strongly enough to go!  I promise, you won't regret it. 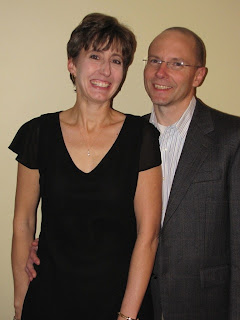